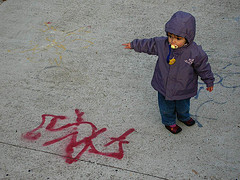 Edmund Blair Bolles has been emphasizing in many posts of his blog Babel's Dawn the primacy of the linguistic function of directing someone's attention in order to explain the origin of language. In his post "Speech Includes Gesture" he comments on a paper by Simone Pika which compares children's and apes' use of gestures. He argues

"that the really peculiar aspect of speech is the presence of what this blog calls the speech triangle, and what Pika calls triadic form. That is, humans are peculiar in having a speaker, a listener, and an outside topic.
Dyadic gestures—actions used to attract attention to the actor—are common enough among apes, but informative triads among apes in the wild are almost unknown. (The one exception: a free bonobo once was observed probably pointing out human observers hiding in the bushes.) Pika says a little ambiguously, “It is therefore quite puzzling why only human beings comment on outside entities simply to share experiences.” I would put it a little differently. It’s quite puzzling how we came to comment on outside entities when no other animal seems to share the need. Once we can give a solid explanation for that puzzle, we will have come a long way in understanding why humans are different.

Because of the thoroughness of the Pika’s review I feel confident in taking the dyadic/triadic distinction as settled. A human peculiarity is our interest in and attention to neutral topics that have nothing to do with the brute facts of survival."

Quite illuminating. I would like to point out (ahem) that the ability to point outside the situation of dyadic interaction in a "triangular" way, peculiar to humans, has to do with the peculiar specular quality of dyadic communication. That is, if I am interactant A, I can only point out C to interactant B once I can take for granted that B can see what I can see, that is, that B is a subject like myself and constructs a perceptual world much like mine but "mirrored" (in the sense that he recognizes me in the same way). Some philosophical reflections about mutuality, the Other, and reciprocal recognition would seem to stretch their roots back to some neurological mechanism which allows this specularity (and I'm thinking of mirror neurons). In a nutshell: the third in question can only appear in a process of interaction which is mutually reflexive (Ok that sounds redundant, but then reflexivity leads you into infinite regress, unless you bring in some third element into the situation, that is).