Does the Brain Use the Scientific Method?

Our senses—sight, hearing, taste, touch, and smell—are bombarded with input from the ever-changing world around us. For centuries, philosophers and scientists have tried to make sense of just how our brains make sense of our environments. A neuroimaging study in the Feb. 24 issue of the Journal of Neuroscience by researchers at the Max Planck Institute in Germany suggests that our brain does so by a process similar to the scientific method.

The idea of a 'little scientist' inside in our heads making and testing predictions is not a new one. It is at the crux of the mind/body problem—or the nature of the relationship between our mental and emotional processes and our brains—and has been hotly debated since Plato was on the lecture circuit.

"I've been studying how brains give rise to minds for over 50 years," says Stephen Grossberg, director of Boston University's Center for Adaptive Systems. "And part of examining the mind/body problem is understanding it in terms of the real-time adaptation of an individual's behavior to a changing world filled with unexpected events."

How are human beings able to suss out the environment around them so quickly and efficiently? One idea is that our brains are forming predictions from the top down. That is, we use data from our past experiences to help cull all the extraneous sensory data that is flowing in from the environment. Neuroanatomy seems to support this idea.

"Everywhere you look in the brain, almost every connection you see has one going in the other direction, too," says Moshe Bar, a neuroscientist at Harvard Medical School. "The more we thought about this anatomical set-up, the more it seemed like there must be some kind of feedback happening."

Arjen Alink, a researcher at the Max Planck Institute, thinks this feedback has everything to do with the brain actively making predictions about the environment—and then testing them against sensory input. "We believe that the brain actually constantly has some kind of expectation about what will happen next," says Alink. "Sensory input provides information about whether those predictions are correct."

Alink and his colleagues decided to test this hypothesis by measuring brain activity in Area V1, the area of the occipital cortex linked to early pattern recognition.

"There was a previous finding that the brain has less activation when perceiving coherent motion, or lots of objects moving in a similar pattern, than when seeing random motion," says Alink. "This and other studies provided a context that if a stimulus is predictable the brain doesn't have to make as much as an effort to process it."

To see if this finding held at V1, the first stage of visual processing in the cortex, the researchers scanned study participants using fMRI while showing them visual images that moved in predictable and unpredictable manners. "If anticipation or prediction is a fundamental principle, then we should see reduced activation in V1 for a more predictable stimulus even at this early stage of processing."

And that is what the group found—suggesting that V1 processing is more efficient when the stimulus is predictable. But going further, the group also found a direct correlation between predictability and brain activation. "

As the stimulus becomes less predictable, we'd expect the signal in the brain to increase. And as it becomes more and more predictable, the activation should systematically reduce," says Alink. "That's what we found. With the least predictable stimuli, we saw the highest response in V1. In the most predictable, the lowest. And in between the two, an intermediate level of activation. It seems that our brain works hard to hypothesize and then test what's going to happen next."

Bar says the finding is consistent with other work going on in the field. "More and more, you see the top-down facilitation of perception and action everywhere. Evolution has shaped our brains to be proactive and anticipate what is happening around us and what could happen later."

But he also argues that motivation is required to do this—and the brain's reward for making these continuous hypotheses about the outside world is a better mood. In a review published in the November 2009 issue of Trends in Cognitive Sciences, Bar suggests that the healthy brain is always generating predictions to help us minimize uncertainty, prepare future actions, and make the right decisions. An unhealthy brain, on the other hand, is unable to make these predictions, leading to more uncertainty and, ultimately, depressed mood.

"Imagine a population that can't generate predictions often enough. They live in a constant state of uncertainty and anxiety," says Bar. "Prolonged anxiety leads to mood-related mental disorders and depression."

He argues that depression leads to a chemical imbalance in the brain that prunes synaptic connections in the hippocampus, making it more difficult for the brain to generate predictions. Bar does acknowledge the hypothesis has a bit of a chicken/egg problem—does the brain stop predicting leading to the lack of those connections and then a lack of neurotransmitter release? Or does a lack of neurotransmitter lead to fewer connections and less predictions? But it is an area, he contends, that requires further study.

"The idea is that there are links between serotonin and associations that help the brain make predictions," he says. "And there may be promising treatments for depression that come out of this line of research."

Alink cautions that his work is preliminary but promising. In future work, he hopes to look at predictions making use of other senses and investigate the role memory plays. Bar plans to focus his efforts on the relationships between predictions and mood disorders. Both agree there is plenty still to learn. But Grossberg is excited about all the possibilities'and future studies that may offer new insights to the age-old mind/body problem.

"This is where the revolution is. It's not about predicting in a stationary world where things don't change. That's classical, that's known. And it's not just about prediction," says Grossberg. "It's about how our brains can learn to make predictions about a world that's changing in unexpected ways. It's understanding how new fast learning and information processing can occur in response to a non-stationary world without destabilizing our current memories and knowledge."

Verbal communication is a joint activity; however, speech production and comprehension have primarily been analyzed as independent processes within the boundaries of individual brains. Here, we applied fMRI to record brain activity from both speakers and listeners during natural verbal communication. We used the speaker's spatiotemporal brain activity to model listeners' brain activity and found that the speaker's activity is spatially and temporally coupled with the listener's activity. This coupling vanishes when participants fail to communicate. Moreover, though on average the listener's brain activity mirrors the speaker's activity with a delay, we also find areas that exhibit predictive anticipatory responses. We connected the extent of neural coupling to a quantitative measure of story comprehension and find that the greater the anticipatory speaker-listener coupling, the greater the understanding. We argue that the observed alignment of production- and comprehension-based processes serves as a mechanism by which brains convey information. 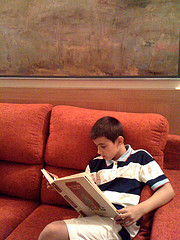