An epitaph for an player or mime, Vitalis (8th-9th c.), translated from the Latin by Richard Axton:

I used to mimic the face, manner, and words of those talking,
So that you would think many people spoke from one mouth.
The subject, presented with a twin image of himself before his eyes,
Would tremble to see a more real self existing in my faces.
Oh, how often a lady saw herself in my performance,
And blushed for shame, horribly embarrassed.
Thus, as many human forms as were seen in my body
Were snatched away with me by the dismal day of death. 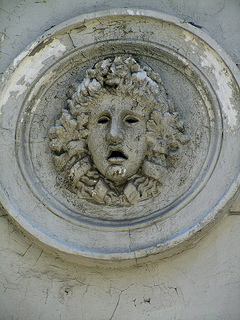