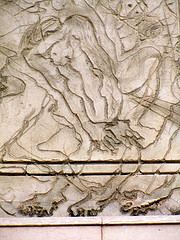 Following recent attention to the "cosmopolitan" (Levy and Sznaider 2006) or
"multidirectional" (Rothberg 2009) dimensions of memory, this colloquium
foregrounds commemorative practices as global positioning systems that enable
individuals and collectives to situate themselves (temporally and spatially,
emotionally and intellectually, politically, and ethically) in relation to
others.  Having conceptualised memorative processes thus, we seek to
investigate the complex relationship between memory and restitution in the
aftermath of both human and natural destruction.

Interrogating the implicit hierarchies of life encoded in disparate forms of
historical reckoning, the colloquium considers whether it is possible to
imagine a universal model of restitution, or whether processes of redress are
necessarily a product of the cultural and historical context in which they
arise. We ask how memorial discourses contribute to official and unofficial
forms of justice through their imbrication with the diverse institutions of
the public sphere.  We analyse the ways in which memory may be shaped by the
medium of representation and redress, asking whether different types of
disaster (environmental, genocidal, terrorist) demand disparate modes of
restitution and/or commemoration and articulation.

The organisers invite papers that might consider, but are not limited to, the
following:

* ****The difficulties of working through traumatic events in ways that
accommodate both the needs of individual victims and the demands of wider
society.

* ****The relationship between divergent forms of historical redress in the
public sphere - from judicial trials to museum exhibits, works of literature,
financial compensation, governmental acts, commemorative architecture, and
claims over territory or land.

* ****The differences between restitution, retribution, compensation, and
closure, and the divergent ethical and political implications attached to
these varying forms of historical reckoning as they are manifested in
cultural and commemorative practice.

* ****The connection between judicial effect and the media of historical
representation; the kinds of individual and collective sovereignty that
result from different modes of restitution.

* ****The political and ethical implications of transferring models of
justice from one cultural or historical context to another, and the issues at
stake with adopting a comparative approach to memory.

* ****How the work of transnational bodies impacts, complements, or
frustrates attempts to reckon with difficult pasts in local and national
communities.

* ****The ways in which diverse forms of cultural practice aim to resist
reinscribing structures of inequality at local, national, and global levels.