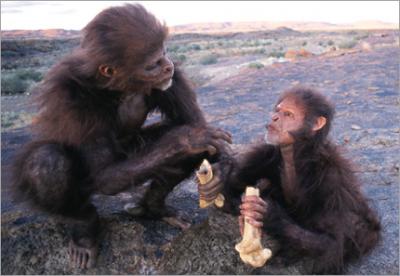 A post in Babel's Dawn discusses the possible association between the development of language and toolmaking ability. A close connection if you think (as Edmund Blair Bolles does), that there is no separate "black box" in the brain for language —no hard-wired "language sense" as argued by Chomsky—and you believe instead that language rests on and interacts with other multi-purpose mental abilities and neural systems. Bolles reads a paper by Dietrich Stout et al. (abstract here) as evidence for his contention that shared attention to a "third" neutral or objective topic (the tool, here), which is necessary for language and for toolmaking, is a central and early development in human evolution. My commentary:

There's another issue associated with tools and toolmaking (especially when tools are involved in toolmaking). There is a rearrangement of attention and of the sense of body limits, so that the body of the tool wielder includes the tool so to speak. This would seem to be if not exclusive to human beings then at least greatly developed in them, and one would think it involves a reflexive sense of one's bodily alterations, and the enhancement of corresponding neural paths (possibly a circuit which enables a complex feedback of information between intentions, process schemata and sense data). Even if the neural paths for tools and those for language are not the same, and don't let's forget that signs are (to some extent) tools, one may suppose that the neurological flexibility required to develop those neural paths might have an indirect effect on the development of the feedback and reprojection paths needed for language processing and advanced conceptualization.

The Stout paper itself seems to argue a rather close relationship between the neural paths required for language and for toolmaking, based on experimental measurements of neural activation: "This includes an increased activation of ventral premotor and inferior parietal elements of the parietofrontal praxis circuits in both the hemispheres and of the right hemisphere homologue of Broca's area. The observed patterns of activation and of overlap with language circuits suggest that toolmaking and language share a basis in more general human capacities for complex, goal-directed action. The results are consistent with coevolutionary hypotheses linking the emergence of language, toolmaking, population-level functional lateralization and association cortex expansion in human evolution."

And they are consistent, too, I should point out, with our previous neurological speculations on the reflexive processes involved in conceptualization and language—what I termed the re-projection of expected shapes, of conceptualized data patterns and of schemata—ideas that the mind derives from the world, processes, and re-projects in order to shape reality to plans and expectations—making it fit more closely to a communicable or repeatable structure. Or, to put it otherwise, the conceptual re-projection of patterns, schemata and ideas is necessary in order to semiotize reality, to turn objects into signs of themselves—or of what they might become. One makes tools with that.