A Commentary On the Origin of Technological Species

A commentary On the origin of technological species

A commentary on Kevin Kelly's post On the Origin of Technological Species:


Astute readers should notice the origins of this famous passage, altered and paraphrased by Kirk Holden, and tweaked by me.     "If during the long course of ages and under varying conditions of instrumentation, technical tools vary at all in the several parts of their organization, and I think this cannot be disputed; if there be, owing to the high geometrical powers of increase of each kind of instrument, at some age, season, or year, a severe struggle for market share, and this certainly cannot be disputed; then, considering the infinite complexity of the relations of all instantiated artifacts of technology to each other and to their conditions of existence, causing an infinite diversity in structure, constitution, and habits, to be advantageous to them, I think it would be a most extraordinary fact if no variation ever had occurred useful to each technical artifact's own duration, in the same way as so many variations have occurred useful to nature. But if variations useful to any technical artifact do occur, assuredly individual tools thus characterized will have the best chance of being preserved in the struggle for product life; and from the strong principle of inheritance of specific technical solutions in hardware and software, they will tend to produce divergent forms similarly characterized. This principle of preservation, I have called, for the sake of brevity, Technological Progress. Technological Progress, on the principle of qualities being inherited at corresponding ages, can modify the IP, improved feature set, or new models, as easily as the earlier form." Of course in the original passage Darwin argued the converse: that natural selection paralleled the same kind of selection we see in tools. The dynamics of evolution within nature and technology have many parallels, I argue, because they are driven by the same forces of exotropy and self-organization.

Well, I'm literal-minded, so I'd say, "useful for users" not useful for the technological artifacts. And that makes all the difference; conscious selection by users we see as no problem; it is natural selection carried out by no intelligent user or designer that Darwin was trying to theorize, and that makes all the difference. That said, there are of course intriguing reflections to pursue when comparing natural and artificial selection. Darwin been there, done that too, but it can be redone. There's a natural-artificial selection of ideas, and the idea of natural selection is also honed and improved by reflecting about it. 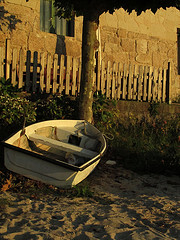