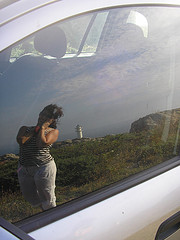 Sometimes (as happens in Beckett's trilogy) a later work throws new light on, or reframes, the narrative technique as well as the story of previous related works. There is much talk these days in the narrative list of the "T.S. Eliot-influence-over-Shakespeare" kind of issue, actually the modernist influence on our readings of Richardson. (The issue began as an offshoot of the debate over first person versus third person narratives).

Does a later work rewrite its predecessors? Well, such rewritings are part of the postmodernist narrative consciousness, they have been happening all the time, but now they take place in elaborate and self-conscious ways, and are fed back on the process of composition and reading. These issues are fascinating for me—they lie at the fuzzy edge where retrospection meets retroaction, and the significance of previous discourse or previous works is modified après la lettre through a reframing which both transforms the previous work and leaves it untouched—most masterfully by bringing to a clearer light certain aspects which were already there, or perhaps had the potential  to be there. Such reframing, then, is a process of emergence.

Here is my contribution in answer to Annjeanette Wiese's note on one such reframing:

> seymour chatman wrote:
>> So, with all due respect to Annjeanette Michelle Wiese's interesting citations, I would question the utility of a phrase like "told mostly in an omniscient third-person perspective from one of the twins."  It is precisely to avoid that kind of blurring of terminology that I proposed a distinction between "slant"--the narrator's perspective--and "filter"--the focalizer's perspective.
>
> I agree with the others that we are appreciatively in Seymour Chatman's debt for keeping these distinctions in view--thank you.
>
> To further this idea, I would very much like to know what is thought about the situation in this second novel, The Proof (La Preuve), in the trilogy by Agota Kristof. This is the novel about which I said it was a third-person narrative from the voice of one of the twins. Sorry for the lack of clarity in this comment. The situation is difficult because the story itself is strictly speaking about "Lucas" and is told in the third person ("On his return to Grandmother's house, Lucas lies down by the garden gate..."). The last chapter changes and is about Claus, Lucus's brother. But the end of the book and the other two novels in the trilogy that bracket it suggest that perhaps unbeknownst to the reader what we've been reading up to the end of the penultimate chapter is either from Lucas's own notebooks (the most likely choice based on the story) or from those of his brother Claus. But the latter claims to have only written the last chapter (although even this last chapter is told in the third person: "Claus arrives by train," etc., perhaps simulating the voice of the rest of the novel). Evidence in a report appended to the end of the novel suggests it was written in same handwriting throughout. It's also possible neither brother exists and that someone is making it all up, as neither twin's identity is confirmed by this report. So it is only retroactively that we get suggestions of who the narrator was. And even then the books remain ambiguous. How should one qualify this situation?
>
> Thank you in advance for your thoughts.
> -Annjeanette Wiese

I would suggest the reframing—with its retroactive 'rewriting' or alternative insights—takes place not just "objectively" in the context of the later novels, but also locally every time one of these novels, or else the three, is used in a given reading or communicative exchange. Which is perhaps another way of saying that a trilogy is a whole made of self-standing units.

There are bibliographical listings on retrospection, hindsight bias, etc. in my Bibliography of Literary Theory, Criticism and Philology.