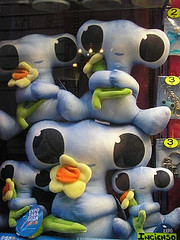 "The recursive property briefly outlined earlier ...  may be a distinct human property". Chomsky's notion that the recursive potential of human language is an evolutionary breakthrough in communication was under attack in the recent Barcelona conference, according to this post in Babel's Dawn, "Recursion can be a 'side effect'":

A few hours after Derek Bickerton argued that recursive processes are not needed to generate sentences, Joris Bleys argued in a workshop that even if they are needed they require no special evolutionary jumps to appear. Recursion (the transformation of preliminary phrases into final sentences by embedding some preliminary phrases into others) can simply be a side-effect of trying to keep linguistic knowledge as simple as possible. If the Bickerton and Bleys papers stand there seems to be no syntactical reason why language should be limited to humans.

This last perspective comes from the field of artificial intelligence. The paper on recursion and evolution by Chomsky et al. is here. My comment to the post in Babel's Dawn:

OK, a formal account may be given of how to generate a grammar with minimal ingredients. Chomsky would be happy enough with that. There remains though a case for evolutionary discontinuity, since the interpretation of these recursions and ever more complex boxings requires a processing ability that animals do not have. The ingredients of the grammar are simple enough, but their combinations soon become unwieldy for a parrot's brain to handle. This account of grammar still requires an ability to draw imaginary mental frames around formal units - a framing ability of the mind which is beyond the abilities of animal brains. Which is the neural mechanism which allows this complex framing? How did it develop? There's some kind of discontinuity there, even though the mechanism may be based on more basic or general cognitive abilities.

Babel's Dawn: I have no trouble with the notion of “discontinuity,” if it means that there is some fundamental break between what humans do and what other animals can do. I balk at the idea that we must have “an ability to draw imaginary mental frames around formal units,” because the argument assumes the reality of those formal units. They may be real, but I see no reason to assume as much from the outset. The history of science is full of abstractions (including the gravitational force) that once were taken to be real, but were not. Questions like <> and <> strike me as off target precisely because they try to explain an abstraction rather than a phenomenon.

But that's what the whole thing is all about—abstractions, the ability to see either "two" or "one plus one" in something which is the "same" phenomenon. Or, to put it otherwise, to see that "1+1" both is and isn't "2". Frames may be imaginary, but they do acquire a substantiality, and semiotic phenomena are phenomena all right.