Notes on the logic of linguistic politeness from Steven Pinker's The Stuff of Thought (chapter "Games People Play").

Touchy, touchy: The logic of Politeness:

"Politeness Theory begins with Erving Goffman's observation that when people interact they constantly worry about maintaining a nebulous yet vital commodity called 'face' (from the idiom 'to save face'). Goffman defined face as a positive social value that a person claims for himself. Brown and Levinson divide it into positive face, the desire to be approved (specifically, that other people want for you what you want for yourself), and negative face, the desire to be unimpeded or autonomous. The terminology, though clumsy, points to a fundamental duality in social life, which has been discovered in many guises and goes by many names: solidarity and status, connection and autonomy, communion and agency, intimacy and power, communal sharing and authority ranking. Later we will see how these wants come from two of the three major social relations in human life.
Brown and Levinson argue that Grice's Cooperative Principle applies to the maintenance of face as well to the communication of data." (380) 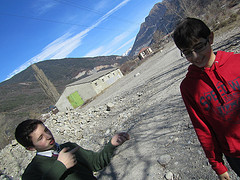 Actually, Goffman defines face as the social identity or value claimed by a person in a specific encounter, not "in general". And in his essay "On Face-work" he argues that sustaining face is a collaborative enterprise, in which all interactants help each other. (When they are not actively mauling each other's face, that is).

"People have to get on with the business of life, and in so doing they have to convey requests and news and complaints. The solution is to make amends with politeness: the speaker sugarcoats his utterances with niceties that reafirm his concern for the hearer or that acknowledge her autonomy. Brown and Levinson call the stratagems positive and negative politeness, but better terms are sympathy and deference" (381).

Pinker explains some mechanisms of politeness, such as respect pronouns and indirect speech acts. And he criticizes Brown and Levinson's approach: "Rather than having a simple face-threat meter in their heads, people tend to target certain kinds of face threat with certain kinds of politeness" (391). There is too much assumption of cooperation between speaker and hearer, not enough recognition  of conflicting aims.

Muddy it up: Vagueness, deniability and other strategies of conflict

Pinker's analysis of an implicated bribe to an officer "shows that indircet speech is not an example of pure cooperation. Implicature Man is manipulating an honest officer's choices to his own advantage and to the officer's disadvantage. It is consistent with the theory by the biologists Richard Dawkins and John Krebs that communication in the animal kingdom can often be a form of manipulation, not just information-sharing" (395).

Political lobbying in the USA is a manipulation of the legislature, influencing it with money, but it's mostly done through implicatures, not with literal bribes.  In bribes or in sexual advances, keeping an offer "off the record" is safer for both parties.

Communality, first essential type of relationship; it is essential to social animals, although it is vulnerable to greed. Communal meals as a ritual of enhanced community all through the world, "to reinforce the folk-biological intuition that people are made of the same flesh and hence are parts of one bit super-organism" (403).

"Personal boundaries can also be eroded when people undergo an intense emotional experience together, like an ordeal of hunger, terror, or pain, or a drug-induced altered state of consciousness. These cheap tricks are common in inititiation rites all over the world.
A sense of communality via folk biology can also be reinforced by myths and ideologies. People are told that they descend from a patriarch or a primeval couple, or that they are connected to a natal land, or came into being in the same act of creation, or are related to the same totemic animal. Here is a rule of thumb: Whenever a society (including ours) has a cultural practice that seems bizarre, its members may be manipulating their intuitive biology to enhance feelings of communality" (403)

Close-knit groups (friends, families, clans) do not make explicit the terms of their communality or negotiate them, instead they engage in rituals of solidarity. "The very act of delineating perquisites and obligations in words undermines the nature of the emotional (and in their minds physical) fusion that allows them to share instinctively" (404).

"Though visible signs of the ability to prevail in a fistfight are the most salient advertisements of authority, they are not necessarily the qualifications that earned authority in the first place. Dominance in humans is tied up with status: the possession of assets like talent, beauty, intelligence, skill, and wisdom. And in the end, dominance and status are social constructions that depend crucially on the perception of others and of oneself. How much authority you possess depends on how much authority you are prepared to claim, and on how much authority others are willing to cede to you. This, I believe, is the real nature of the concept of 'face' that was bandied around by Brown and Levinson without a satisfying theory, though it was broached now and again by Goffman). Their 'negative face', the desire not to be impeded, is a claim of dominance their 'positive face', which they sometimes defined as a desire for approval or esteem, is a claim of status. (At other times they define it as a desire for sympathy, but I suspect that's a different emotion, more closely tied to communality)." (405)

The question, I think, is that Pinker's analysis does not integrate both directions in a satisfying way, either. Communality and authority, solidarity and power: they are intimately related, and the power one person can claim depends above all on the ties binding the community together. Power comes in many guises, and although physical power is the most basic of them all, its scope is very limited when compared to social power. The power of money is nothing but condensed social power (money being condensed work, work by others "frozen" and encapsulated for the benefit of whoever it is that  has the money). And political power depends of course on complex networks of social solidarity and group commonality. Commonality and authority, then, are two faces of the same coin, which is human sociality.

Third relationship type: Equality Matching (reciprocity, exchange, fairness). Fairness is essential in human societies, and one should note that already in primate societies there have been observations of punishment of free riders or cheats: individuals who punish cheaters gain social acceptance, as being more reliable.

Fiske's taxonomy of social relationships includes a fourth one, Market Pricing. But for Pinker this does not belong to human nature, but to the specific culture of market economies, it is not universal, and it is cognitively unnatural:

"People all over the world think that every object has an intrinsic fair price (as opposed to being worth whatever people are willing to pay for it at any time), that middlemen are parasites (despite the service they render in gathering goods from distant places and making them conveniently available to buyers), and that charging interest is immoral (despite the fact that money is more valuable to people at some times than at others)." (409 - the anti-capitalist fallacies).

"Though Communality, Authority, and Exchange are universal modes in which people conceive of their relationships, cultures differ in which relationship type should be applied to which resource for which kind of dyad in which context" (410).