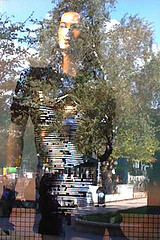 "Does evolution explain our behaviour?" For Raymond Tallis the answer is no. The latest contribution to the forum On the Human is a humorous attack on the simplistic evolutionary theories of human culture promoted by sociobiology à la E. O. Wilson, à la Desmond Morris, à la Dennett or à la Dawkins. The latter's theory of "memetics" gets a regular argumentative bashing. So does Dennettics. While I agree in part, as I have always found the notion of meme a bit mema, I counter with the following comment, a defense of evolutionary theory—minus the reductionism. So, yes indeed, evolution should explain our behaviour:

While one can enjoy this spirited attack on reductionism and “Dawkinism”, we should be wary of throwing out the baby of evolutionary thought with the bathwater of reductionism. I can’t see anywhere in Raymond Tallis’s account a proviso in this sense. Evolutionary thought, rightly understood, is attentive to emergent phenomena, such as language and the complexities of human culture, and will not try to reduce them to either memes or genes or primate behaviour in the savanna. But one thing it will do— it will attempt to trace both the process of emergence and the foundations that made it possible for these phenomena to emerge. I can see that Tallis’s contribution is interested in preserving the specificity of human behaviour. But I would insist that a historical sense of the human, when seen in the wider perspective, cannot help but tie up with the evolutionary development of the species. Bring in history, semiotics, science, cultural anthropology and all the disciplines which help to describe the complexity of the human phenomenon. They also have a history and a development, by the way. But do not stop at merely registering the complexity of humans: we should also try to understand how it came to be in the first place. If Tallis’s critique of some simplistic trends in evolutionary psychology helps to bring the real issues into focus, so much the better.