Ways in which Culture Drives Evolution

An article in the forum On the Human, by Mark Stoneking, discusses ways in which cultural developments, far from "preventing" or putting a stop to human evolution, may be actually driving it. The issues are focused from the viewpoint of a molecular geneticist—natural selection of certain genes under specific cultural conditions, lactose tolerance, sickle-cell anemia, etc. I add the following comment:

Perhaps the most relevant ways in which culture may drive human evolution are left undiscussed. One: weapons of mass destruction (or their environmental equivalents). Once humans acquire the power to destroy most of their own populations, and use it, the surviving gene pool may show significant statistical variations with respect to the previous one. Perhaps hypothetical yet, but don’t rule it out. Two: Differential reproduction in different cultures. E.g. here in Spain slightly more than one child per couple; African populations have other habits. Chinese policies about number of children, etc.- All of that is relevant. Three: Increased communications mean an increased choice of mates for sexual selection. Some people likely to get married in a small agricultural community are likely to stay unmarried, with their genes de-selected, in a different régime of communications. And there may be other issues as well. 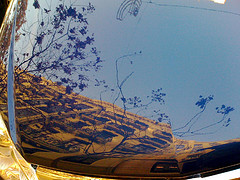